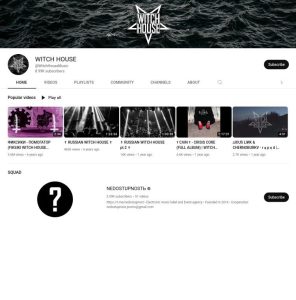 WITCH HOUSE is a YouTube channel dedicated to providing listeners with a unique selection of witch house music, electronic music, house, EDM, techno, remixes, and mixes. With a wide range of dark, atmospheric audio curated by the channel's creators, it's the perfect place to explore and discover new music of all genres. 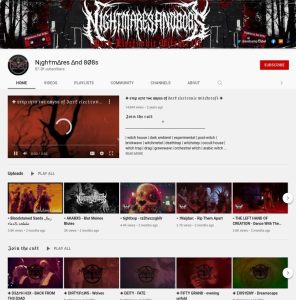 If you're looking for some witch house music, then you'll want to check out the N¡gh†m∆res ∆nd 8Ø8s YouTube channel. This channel features a variety of witch house music, as well as other chillwave and trap genres. You can expect to find a lot of ambient and vaporwave tracks, as well as some Wave Music. Whether you're looking to relax or get hyped, this channel has something for you. 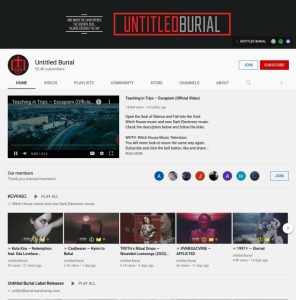 The Untitled Burial channel on YouTube specializes in witch house music. They boast a large collection of new music for 2022, as well as a variety of dark and electronic music. In addition to their music selection, they also offer witch house remixes, mixes, and beats. Their playlist and radio are perfect for anyone looking to get into the witch house music scene. 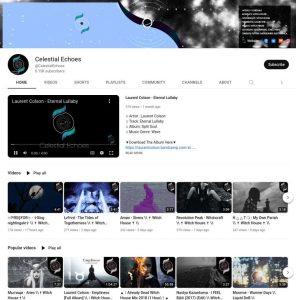 Celestial Echoes is a YouTube channel dedicated to producing and showcasing top-notch witch house and indie electronica music. It features a diverse mix of styles ranging from liquid dnb and melodic dnb to atmospheric trap, chill trap, wave trap, and chill step. It's the perfect destination to discover new and emerging artists in the field of musical creativity. Get ready to explore vast horizons of sound and blissful vibes! 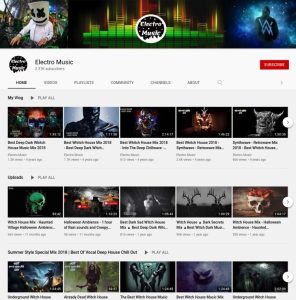 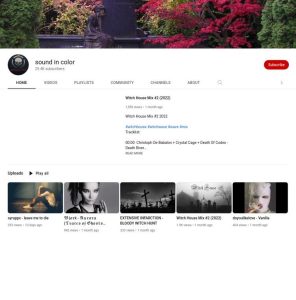 Sound in Color is a dark and atmospheric YouTube channel that specializes in the witch house and future garage music. The channel has a deep, surreal feeling to it, and the music is perfect for chilling out or getting lost in thought. Whether you're a fan of witch house or just looking for something different, Sound in Color is definitely worth checking out. 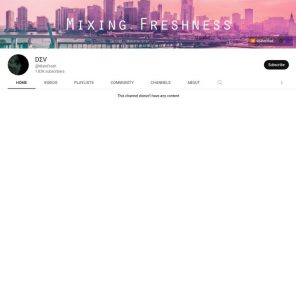 DΣV is a YouTube channel that offers an array of dark and experimental electronic music genres, ranging from Witch House, Dark House, and Dark Trap to Post Trap, Darkwave, and Ghost Drone. Their mixes are an eclectic selection of dark and atmospheric sounds, perfect for creating a spooky and immersive soundscape. 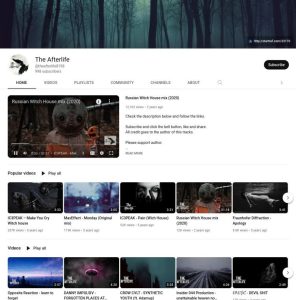 The Afterlife YouTube channel is a witch house music lover's paradise. With everything from witch house mixes, remixes, playlists, radio, and the top witch house songs of 2019, you'll find plenty of spellbinding music to explore. Enjoy the supernatural sounds of витч хаус! 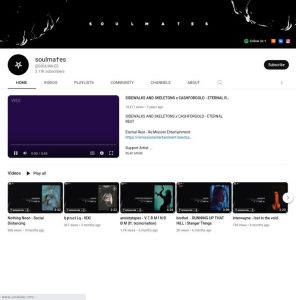 Soulmates is a YouTube channel devoted to exploring the dark side of music, with a special emphasis on what they call witch house and dark trap. They feature darkwave and wave-influenced music that creates an intense, mysterious, yet entrancing atmosphere. If you're looking to expand your music horizons into the darker side of the music world, Soulmates is definitely worth checking out. 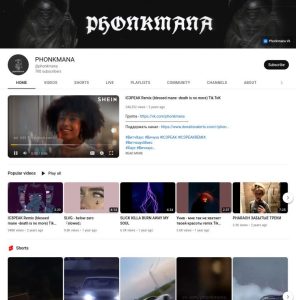 Death666 YouTube channel is an electronic music channel focused on the Witch House music genre, Memphis Rap, and Memphis 66.6. It features a variety of mixes, such as Death666 Phonk, Phonk Drift, Phonk для тиктока, and Witch House Mix, as well as a selection of Memphis Rap and Memphis 66.6 tunes. It is perfect for those wanting to discover new Witch House and experimental hip-hop artists. 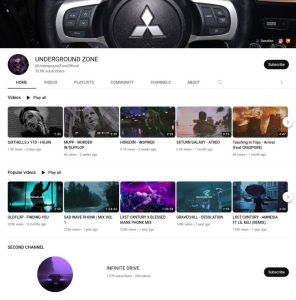 UNDERGROUND ZONE is a YouTube channel dedicated to the exploration and celebration of alternative music genres such as witch house, electronic, hip hop, and other kinds of music. It's a hub for discovering new music and uncovering unknown musicians, and its mission is to provide its viewers with an alternative listening experience. 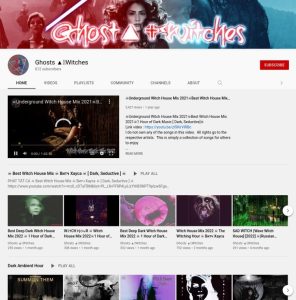 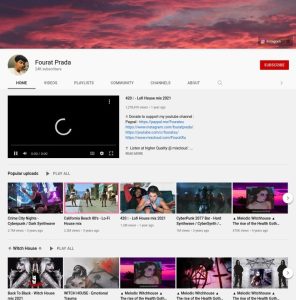 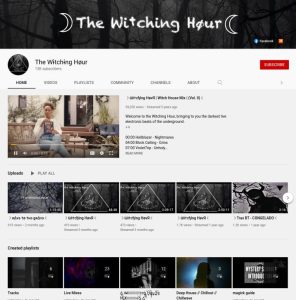 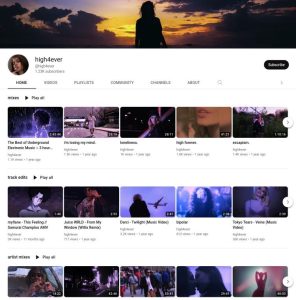 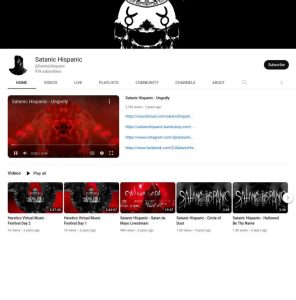 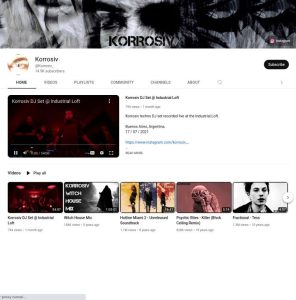 Korrosiv is a YouTube channel that contains the dark and mysterious sounds of witch house music. Hosted by DJ Korrosiv, it features music from a variety of artists spanning the witch house, BLVCK CEILING, and OCCVLTISM movements. Whether you're looking to get lost in hypnotic rhythms or experience a unique soundscape, Korrosiv has something for everyone.

The Artists Behind Witch House Music

Witch House music is an enigmatic genre of experimental electronic music that melds darkwave, experimental pop and hip-hop. Its ethereal soundscapes often feature intense and slowed down vocal samples alongside sparkling keyboards and menacing drums. The genre was heavily propelled into mainstream consciousness around the mid 2000s by producers and DJs who crafted the sound into new and innovative directions.

Witch house music has become a growing force in pop culture in recent years. Often combining elements of industrial, indie, and hip-hop, the genre is a unique blend that is as dark and compelling as it is accessible in sound. Emerging in the early 2010s, some of the genre’s most popular artists, such as Purity Ring, Balam Acab, and Salem, found success in large part due to its ability to blur the lines between ambient soundscapes and infectious bass lines.

The blend of haunting synthesisers, heavy drum rhythms, and shoegaze-style vocals were a major influencer on the current pop/indie rock sound. With the aesthetic of witch house, there’s certain distinctness that makes it impossible to confuse with any other genre. Themes varies drastically from the occult, to science fiction, to even religious imagery, but it all oozes with a certain grimy, post-industrial sheen that many artists today have adopted.

The influence of witch house music isn’t just restricted to genre sound, but also the visuals. Music videos, album artwork, and even live visuals have taken a dark, experimental twist as a direct result of what witch house established as the norm. And although the genre has been in a state of dormancy for the past few years, new music and visuals will surely rise to the surface this year to add even more depth and mystery to pop culture’s constantly evolving soundscape.

Top Artists to Introduce You to the Witch House Scene

The witch house scene has grown quickly in the past few years, bringing with it a unique style of dark, ethereal music. It’s an exciting genre that can take some time to get familiar with, so we’ve pulled together some of the top artists to introduce you to the witch house game.

So, if you’re ready to dive into the spellbinding world of the witch house genre, these are the top artists to start you in your musical journey. With a unique blend of atmosphere and experimental ideas, each of these rising groups have something special to offer to the scene.